What to Teach your Children About Bicycle Safety

What to Teach your Children About Bicycle Safety

Most Canadian children age six to 16 ride bicycles. Children start cycling as play when they are very young. As they grow older and become more experienced, the transition from toy to transportation is made. With increasing independence, parents have less control of where the bicycle is ridden and how it is used. The attitudes you, as a parent, instill in your children from a young age will determine how they will ride for years to come.

Make sure your child's bike and helmet are the right size. He or she should be able to straddle the bike with both feet on the ground; a bike that is too big or too small is a safety hazard. Ten-speed bikes are not a good idea because small hands often cannot make the handbrakes work. Buy a bike with a coaster brake. As a minimum, your child's first bike should be equipped with a bell and reflectors.

For young children, set the following hard and fast rules:

The majority of bicycle injuries do not involve motor vehicles. Most are falls, collisions with stationary objects, and collisions with other bikes or pedestrians result from the bicyclist losing control, and most occur less than five blocks from home, in familiar surroundings.

But the most serious incidents – including over 90 per cent of cyclist deaths – involve motor vehicles. In most collisions involving child cyclists, the child's action is a key factor. He or she may have violated a law or may simply have poor road sense. Teach your children as if their life depended on the lessons. It does.

Following are some of the most common causes of bicycle injuries:

A youngster rides out of the driveway and gets hit by a car. Very often these incidents involve younger children: the median age is less than 10.

Does your driveway present obstructions to the view of passing motorists, such as bushes or trees? If so, trim them back. Most importantly, teach your child about driveway safety. Go outside to the driveway and have him or her practice the following steps:

Most cyclists who get hit riding through stop signs know that they are supposed to stop. They just don't see why, or they get distracted. Impress on your child that, while he or she may not get hit every time, running stop signs is very dangerous. Take your child to a stop sign and explain what it means, emphasizing the following:

These collisions occur because the bicyclist makes an unexpected left turn without scanning behind for traffic or signaling.

Teach your children to walk their bikes across busy streets, at least until they have some advanced training and are old enough to understand traffic. In the meantime, for residential street riding, you can teach them to always scan and signal before turning left. Go to a playground to practice riding along a straight paint line while scanning behind. Stand alongside and hold up two fingers on your hand after the child rides by. Call their name. After 10 or 15 minutes of practice a 10 year old should be able to look behind and identify how many fingers you are holding up, all without swerving.

Most crashes in which a car coming up from the rear hits a bike while overtaking happen at night. These overtaking accidents can be serious. Most, however, involve older cyclists; the median age is about 20.

Rule out night riding for your youngster. It requires special skills and equipment. Few kids have either. Make your child understand that, if he or she gets caught out after dark on a bike, the only thing to do is to call you for a ride home. Maybe you could tape telephone money to the bike so that, in an emergency, your child can call.

For adults and teenagers, the first requirement is to be visible: use bright lights and reflectors, and wear light-colored clothes with reflective tape. The second requirement is to watch your shadow in the headlights of overtaking cars. If your shadow moves to the right as the car approaches from the rear, this means it is moving left to pass you. If your shadow stays right in front of you, it means the car is headed straight for you. Get out of the way!

Many car/bike collisions take place when children are following each other. The first one may run a stop sign and get through. The second one may get hit. This Group Think behavior is hard to counter.

Teach your child always to assess the traffic situation for him or herself. When a group is riding around, each cyclist should stop for stop signs. Each one should scan to the rear before making left turns.

Less than 20 per cent of reported bicycle injuries involve collisions with cars. Most occur in falls, or as a result of riders losing control. A bad fall can result from a skid, catching a wheel in a crack or even getting a shoelace caught in the chain.

In a spill, the forehead usually hits the ground first. Head injuries cause most bicycle-related deaths and can result in serious injury such as brain damage. Up to 85 per cent of serious head injuries could be prevented by wearing a helmet.

Two-thirds of all cyclist deaths involve head injuries. Transport Canada statistics for 2001 reveal that all cyclist fatalities under age 15 were unhelmeted. That's why it's critical for your child to wear a bike helmet that fits properly and is certified by CSA International.

When choosing a helmet, your child should try on several helmets carefully. Level the helmet over your child's forehead and adjust the chin strap to fit snugly and comfortably. It should protect the forehead without slipping forward or backward; and it should not move unless the scalp moves. A trained salesperson will help you ensure the fit is right.

Insist your child always wears a helmet when riding. (It goes without saying that parents must set an example by always wearing theirs when cycling.) Remember, a helmet only works when you wear it!

Never forget that example is the best teacher. 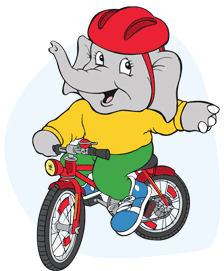