A train cannot stop as quickly as the family van. A string of railway cars may be stopped one moment, and moving the next. What seems to be harmless play around tracks or trains can cost lives or cause serious injury.

Please help your children understand that railway property is not a playground. They can hurt themselves or others if they tamper with railway equipment, trespass on railway property or fail to heed warnings at highway/rail crossings. Download the Railway Safety Promise in the Safety Village: Activity Pages Most train-motor vehicle collisions happen in the daytime, and because the motor vehicle operator failed to obey railway warning signs and devices. Some drivers believe that they can "beat the train." But a 100-car freight train can weigh 10,000 tons or more. Travelling at 80 km/h, it takes about 2,500 metres for a train to stop.

Be prepared to stop at highway/rail crossings.

If your view of the rails is obstructed for 300 metres in either direction, do not attempt to cross until you are certain that no train is approaching. Be especially careful during bad weather which can obstruct your view.

Look for the crossbuck symbol of a highway/rail crossing. Some crossings have lights and bells or gates. Obey the signals. Never try to drive under a gate as it is closing, or around a closed gate. If the gate begins to close while you're under it, keep moving ahead until you clear the crossing.

If a police officer or a member of the train crew is directing traffic at the crossing, obey their directions.

If one train passes, make sure that a second train isn't approaching on another track. They can and do.

Cross the tracks in low gear, and do not change gears while crossing.

Listen for warning bells and whistles. Turn down, or off, distracting fans, heaters or radios. Ask the kids to be quiet until the crossing is safely crossed. Opening the window helps you hear. 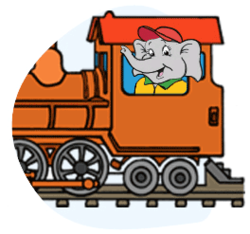